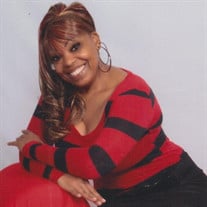 Carol Felicia Trimew was born on October 23, 1963 in Hollywood, Alabama to the late Robert and Shirley Trimew. Baby Carol graduated from Stevenson High School. Carol loved sports. She played basketball, softball and she ran track. She worked for Smurfit-Stone in Stevenson, Alabama before having to leave on long term disability. She came to Christ at an early age. She was a member of the New Covenant Missionary Baptist Church in Stevenson, Alabama. Carol enjoyed shopping, traveling, singing and helping other people. She was a faithful and dedicated member. She loved to fellowship with her church family. She leaves behind to cherish her memories three sons: Keith (Rosalind) Trimew of Mobile, Alabama, Samuel Trimew of Hollywood, Alabama, Scott Broad of Hanceville, Alabama; sisters: Genise Evans of Hanceville, Alabama, Angela Trimew of Hollywood, Alabama and Rene (Steve) Henry of Hollywood, Alabama; a host of grandchildren, aunts, uncles, nieces, nephews, great nieces and nephews, cousins and an endless number of friends. She is preceded in death by her son Tony Trimew; parents: Robert and Shirley Trimew; Brothers Gary Lester Trimew and Robert Michael Trimew. Graveside service will be held at 1 PM on Wednesday, December 2, 2020 at the Old Baptist Cemetery in Hollywood, Alabama Online condolences may be left for the family at www.rudderfuneralhomes.com

The family of Ms. Carol Felicia Trimew created this Life Tributes page to make it easy to share your memories.

Send flowers to the Trimew family.