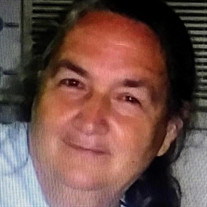 Donna Gail (Cain) Lambert 73 Bridgeport, Alabama Donna Gail (Cain) Lambert, 73, of Bridgeport, Alabama, passed away Wednesday, December 23, 2020, at Cumberland Health & Rehab in said city. Donna was born April 6, 1947 in Providence, Kentucky to Claude and Mildred (Burklow) Cain. She was one of ten children. Claude's work as a coal miner led to the family relocating to South Pittsburg, Tennessee and eventually nearby Bridgeport, Alabama in the 1950s. While attending high school in Bridgeport she met James D. Lambert and they married on September 2, 1964. To this Union, seven children would be born. Donna first worked as a US Census enumerator in 1970 in Marion County, Tennessee before going to work at Salem Carpet Mills in South Pittsburg. She then worked as a dispatcher at South Pittsburg and later, Marion County/Jasper, Tennessee police departments. The family moved to nearby Bridgeport, Alabama in 1975 and following the birth of her last child in 1981, Donna worked part-time at the local head-start and schools. She also worked part-time as a DJ at WBTS radio station in Bridgeport where her husband worked. She finally went to work as a dispatcher for the Bridgeport Police Department where she was employed for 17 years. Donna loved going to yard sales on the weekends and spending time with her family. She even enjoyed going to concerts with her two youngest daughters. Family vacations were an annual trip to Kentucky to visit her family after they moved back to the Bluegrass state. Donna was preceded in death by her husband of 42 years, James Lambert; parents, Claude and Mildred Cain; brothers, Bobby, Ronnie, Randy, Larry and Billy Cain; granddaughter, Betty E. Beja; great-grandsons, Hayden Dillard and Edward Hayes; daughter-in-law, Jennifer Kirk Lambert; brother-in-law, Wilber Smith; and granddaughter-in-law, Sabrina Moore Hayes. Donna is survived by sons, James Dennis Lambert, Jr. of Bridgeport and Steven R. Lambert of Stevenson, Alabama; daughters, Vanessa (Garland) Tipton, Stephanie Lambert, both of Bridgeport, Valerie (Raymond) Hayes of Dalton, Georgia, Shannon (Joe) Mullins of Madison, Alabama; and Erin Lambert of South Pittsburg, Tennessee; brothers Garry (Barbara) Cain of Alabaster, Alabama and Jerry (Sherry) Cain of Madisonville, Kentucky; sisters, Claudia Cain Smith and Noel Cain of Providence, Kentucky; 13 grandchildren, 13 great-grandchildren, several nieces & nephews, several step grand/great grandchildren and many other family members. Family will receive friends at Rudder's Funeral Home in Bridgeport, Alabama Saturday, December 26th, 4 - 6 p.m. CST and Sunday, December 27th, 12 - 2 p.m. with services starting at 2 p.m. in the funeral home chapel. Interment will follow at Mount Carmel Cemetery in Bridgeport. We respectfully request that social distancing, wearing mask at all times and all CDC and state Covid-19 measures be adhered to at funeral home and at cemetery. The family would like to extend our heartfelt thanks to the staff of Cumberland Health & Rehab for the quality care of our mother and for the support shown during this trying time.

The family of Donna Gail Lambert created this Life Tributes page to make it easy to share your memories.

Send flowers to the Lambert family.