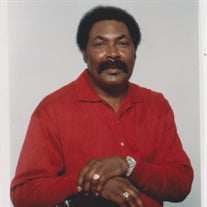 Mr. James D. (JD) Cothron was born on May 21, 1942 to the late Hubert Sr. and Mary Lou Cothron. He departed this life on March 14, 2019. He confessed his life to Christ at an early age. He was a member and choir member of the New Hope Missionary... View Obituary & Service Information

The family of Mr. James Donald Cothron created this Life Tributes page to make it easy to share your memories.

Send flowers to the Cothron family.