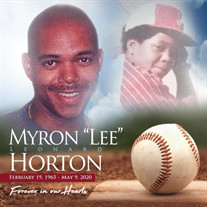 Myron Leonard “Lee” Horton, 55, of Scottsboro, Alabama, passed away on Saturday Evening, May 9, 2020 in Huntsville, AL. Myron was born to David & Stella Horton on February 19, 1965 in Scottsboro, AL where he later became an esteemed athlete in his youth. Myron was baptized at an early age at New Hope MBC of Hollywood, Alabama. After his decline in health in 2011, Myron became a resident at Brookshire Healthcare Center in Huntsville, AL until his transition. He was preceded in death by his Mother, Stella Ruth Horton. He is survived by his twin daughters, Christina A. (Peter) Fontimayor and Christiana A. Horton; one son, Christian A. Horton; two Grandchildren, Layla Ruth and Laydon Ross McDowell of Columbus, GA; his devoted Father David Horton of Scottsboro, AL; one brother, David B. Horton of Dallas, TX, one niece; Fallone A. McQueen, and three Great Nephews; DaMyson Abner, Dallas Abner and Vince McQueen of Montgomery, AL. Along with a host of special Aunts, Uncles, cousins & friends, Myron also leaves to cherish two special friends, Carol Busby & Linda F. Green. Online condolences may be left for the family at www.rudderfuneralhomes.com

The family of Myron Leonard "Lee" Horton created this Life Tributes page to make it easy to share your memories.

Send flowers to the Horton family.