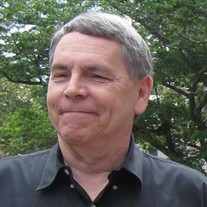 Robert Duane Hayes, 74, passed away at his home in Scottsboro, Alabama, on Friday, December 21, 2018. Bob is predeceased by his parents, Roscoe Duane and Ethella Virginia Hayes, and his sister, Evalyn Ethella Hayes. He is survived by three daughters, Amanda (Lyn Shultz) Hayes of Memphis; Lisa Hayes of Decatur, Georgia; and Emily (Sam) Hardy of Atlanta; two sisters, Mary (Dave) Sharpe of Edgemont, Arkansas; and Frances (Bill) Fargie of Hoschton, Georgia; and his former wife, Lynn Marlow of Port Townsend, Washington. Bob was born in Nashville, Tennessee, on January 4, 1944. He graduated from Central High School in Memphis and studied Electrical Engineering at Memphis State University (now the University of Memphis). He was a control systems engineer for Honeywell and later Weyerhaeuser and worked as an IT consultant for local businesses in the Scottsboro area and elsewhere for nearly 20 years. He was a veteran and served in the U.S. Navy as a sonarman on the U.S.S. America during the Vietnam War. Bob was also interested in hobby electronics and computer programming. He built projects based on micro-controllers and in several different programming languages. An amateur radio enthusiast since his was a teenager, Bob served as president of the Jackson County (Ala.) Amateur Radio Club for seven years. He was dedicated to helping the club upgrade equipment and move to new technology to help provide severe weather spotting and emergency communication assistance to the Jackson County EMA and the National Weather Service. He was a longtime member of the Scottsboro First United Methodist Church. The family wishes to express their love and appreciation to Christy Townson of Alley’s Senior Care, who became a friend as well as serving as a tremendous source of support. The memorial service will be Friday, January 4, at 2 PM at Memorial Park in Memphis, Tennessee. In lieu of flowers, the family requests donations to the American Diabetes Association and the Jackson County Amateur Radio Club (jcar.us). Condolencesmay be made at rudderfuneralhomes.com

Robert Duane Hayes, 74, passed away at his home in Scottsboro, Alabama, on Friday, December 21, 2018. Bob is predeceased by his parents, Roscoe Duane and Ethella Virginia Hayes, and his sister, Evalyn Ethella Hayes. He is survived by three... View Obituary & Service Information

The family of Robert Duane Hayes created this Life Tributes page to make it easy to share your memories.

Robert Duane Hayes, 74, passed away at his home in Scottsboro,...

Send flowers to the Hayes family.