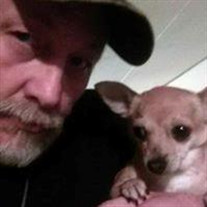 Thomas Wade Meeker On the morning of Tuesday, May 28, 2019 Wade passed away. As a lifelong resident of Stevenson, he leaves behind many friends and family. He will be dearly missed. He was born March 13, 1964 at North Jackson Hospital in Bridgeport, Alabama to his proud parents, Faye & Freemon Meeker. He grew up loving the outdoors and working with his hands. He graduated from Stevenson High School in 1983 and began his career soon after. On June 9, 1983 he started his first job. He was hired as an Assistance Operator on Sussens in the Heat Set Department at Avondale Mills in Stevenson. As he gained experience there, he ultimately became a Technician in the textile industry. Wade’s keen sense for business lead him to create the original Crow Creek Deer Processing facility. He successfully managed it for several years, until it interfered with his true love for the outdoors and “it had to go”! He truly loved fishing & hunting. Anyone that knew him, knew once hunting season was over it was time to start fishing. Though each overlapped the other, there was always time to prepare and enjoy the water or the woods. Wade had a kind heart and a firm belief to live life his way. Like all of us, his 55 years on earth were filled with ups & downs. There are many different seasons in a lifetime. If we learn not to give up in the winter season of life, we will be able to find the promise of our spring, the beauty of our summer, and the fulfillment of our fall. Life’s measured when all the seasons are over. He would encourage us all, to make the best of each season of life. Wade is survived by his beloved pet & companion, Betty; Special Friends, Dawn Tucker and Elijah Blevins of Stevenson; his sister & brother in law, Donna & Allen Sands of Stevenson; his nephew, Brad Sands of Stevenson; his niece, Shellby Sands of Fort Oglethorpe, GA; and “like a brother” cousin & wife, Estol & Theresa Riddle of Rising Fawn, GA their daughter and son-in-law, Miranda & Rodney Scott of Camden, SC. Keith & Marcus Baker were an important part of his life as well. He was preceded in death by his parents, Faye & Freemon Meeker; maternal grandparents, John & Ethel Riddle; paternal grandparents Charlie & Mollie Meeker; and his best friend, Aaron Sullivan. Rudder Funeral Home in Stevenson managed his remembrance of life. Visitation was held Wednesday, May 29th from 5:00 PM – 8:00 PM and the memorial service was held Thursday, May 30th at 1:00 PM. www.rudderfuneralhomes.com

Thomas Wade Meeker On the morning of Tuesday, May 28, 2019 Wade passed away. As a lifelong resident of Stevenson, he leaves behind many friends and family. He will be dearly missed. He was born March 13, 1964 at North Jackson Hospital in Bridgeport,... View Obituary & Service Information

The family of Thomas Wade Meeker created this Life Tributes page to make it easy to share your memories.

Send flowers to the Meeker family.