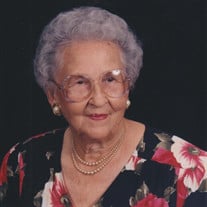 Mrs. Velma L. Sebring 99 Of Scottsboro Died on Sunday June 14, 2020. Mrs. Sebring was a member of the Center Point Baptist church for 79 years. Velma Sebring grew up in Scottsboro, Alabama and worked for the Benham Corporation, where she became a supervisor. In addition to her career, she also was able to raise a family, assist her husband Bill with the farm, rental activities and so much more. She loved Alabama football and was known to take her family to places far away as Dallas or Miami. In later years she loved traveling to Tuscaloosa during game weekends to spend time with her sisters and others. She also liked to crochet, was a wonderful cook, and had a great, witty sense of humor. As a lot of family and friends will attest, she was “fun” to be around. Most of all, Velma Sebring loved serving the Lord. She started teaching Sunday School at Randall’s Chapel UMC at age 17. After getting married, she began teaching at Center Point Baptist where she taught classes for over 75 years consecutively. Her record longevity as a Sunday School teacher was recognized by Congress and the Governor. She finally “retired” from Sunday School teaching in 2019 after 81 years, starting with a group of young girls to her final class known as The Last Stop. Velma Sebring’s last stop is now in heaven with her Lord that she studied and served faithfully throughout her lifetime. Velma was preceded in death by her husband Bill Sebring, Parents Shird and Lillie Carter and four Sisters and Two Brothers. Velma is survived by her Son and Daughter-in-law Robert and Debbie Sebring Daughter and Son-in-law Billie Ann and Wayne Wallace, and Daughter Nora Sebring. Four Grandchildren Donald (Debbie) Wallace, and Russell (Ginger) Wallace, and James Robert Sebring, Jr. and Clinton Edward (Taylor) Sebring. Six Great Grandchildren Reagan Wallace, Rachel Wallace, Seth Wallace, Bryant Wallace, Sadie Wallace, and Jude Sebring. And several Nieces and Nephews. The family will receive friends on Tuesday, June 16, 2020 at the Rudder Funeral Home in Scottsboro from 5 PM until 8 PM. Funeral Services will be held at 2 PM on Wednesday, June 17, 2020 at the Center Point Baptist Church in Scottsboro with Bro Randy Atkinson and Bro Roger Hobbs Officiating. Burial will follow into Pine Haven Memorial Gardens in Hollywood, AL. In lieu of flowers the family requests that donations be made to The Gideons International or the Jackson County UA Alumni Scholarship Fund. Online condolences maybe left for the family at www.rudderfuneralhomes.com

Mrs. Velma L. Sebring 99 Of Scottsboro Died on Sunday June 14, 2020. Mrs. Sebring was a member of the Center Point Baptist church for 79 years. Velma Sebring grew up in Scottsboro, Alabama and worked for the Benham Corporation, where she became... View Obituary & Service Information

The family of Mrs Velma L. Sebring created this Life Tributes page to make it easy to share your memories.

Send flowers to the Sebring family.